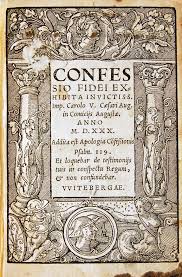 But be on your guard. For they will deliver you over to councils, and you will be beaten in synagogues, and you will stand before governors and kings for my sake, to bear witness before them. And the gospel must first be proclaimed to all nations. And when they bring you to trial and deliver you over, do not be anxious beforehand what you are to say, but say whatever is given you in that hour, for it is not you who speak, but the Holy Spirit. And brother will deliver brother over to death, and the father his child, and children will rise against parents and have them put to death. And you will be hated by all for my name’s sake. But the one who endures to the end will be saved.
Mark 13:9-13 (ESV)

In these days when the news is filled with images of people defacing or destroying the artifacts of history, is it appropriate to bring to mind the actions of the German princes who stood before Emperor Charles V in Augsburg on June 25, 1530? In spite of the recent attacks on the statues and memorials of our forefathers, remembering the past is always appropriate. The philosopher, George Santayana, once said, “Those who cannot remember the past are condemned to repeat it.” We learn the mistakes of our predecessors, even as we are inspired by their successes.

In 1530, while the Holy Roman Empire was threatened by the Turkish invasion, the Emperor called for a meeting in which the opposing sides of the Christian Church could come to an agreement. He was concerned that dissension in the Church would cause member states in the empire to ignore the call to push the Turks from the doors of Vienna. Hence Charles V asked all the concerned parties, the Evangelicals (Lutheran), Reformed, and Roman Catholics to present their doctrine so there can be agreement.

The Lutheran princes, by signing the Augsburg Confession, moved the discussion of doctrine from the abstract musings of theologians to the practical theology of daily living. The author, Philip Melanchthon, was a lay man, not clergy, who worked closely with Luther on this statement of faith.

Over the years, various Lutheran bodies have strayed from the clear confession made at Augsburg. By having an unchanged confession, the members of these churches, and other concerned Lutheran bodies, can call for repentance, to repudiate the false doctrines being adopted, and return to teaching pure doctrine.

Today, Trinity Lutheran Church in Slayton, Minnesota, remains committed to the confession of the truth once read before the Emperor. That confession stands under the clear Word of God, answering questions and controversies about our understanding of the Bible. No confession can stand above Scripture, but each confession declares the understanding in times of controversy.

At the heart of the Augsburg Confession is the Fourth Article: Also they teach that men cannot be justified before God by their own strength, merits, or works, but are freely justified for Christ’s sake, through faith, when they believe that they are received into favor, and that their sins are forgiven for Christ’s sake, who, by His death, has made satisfaction for our sins. This faith God imputes for righteousness in His sight. Rom. 3 and 4.

On this article, more than any other, the Church stands. Thus we confess that Jesus Christ, true God and true man, died for the sake of sinful mankind. Today we celebrate this confession, and ask God’s rich blessing as we proclaim His grace and mercy to this sin-sickened world.

May our Lord strengthen your faith, that you may make the good confession of Christ Jesus, even as did our forebears at Augsburg.